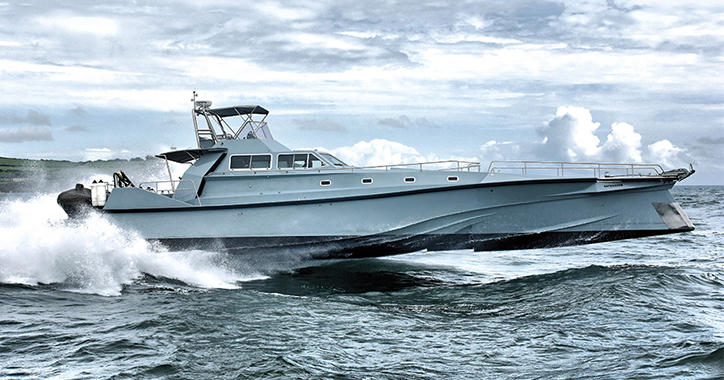 It was a delivery voyage extraordinaire made in one of his own Safehaven XSV20s, a striking 23m all-weather vessel that has the power to court both wealthy superyacht owners and professional mariners alike.

The newly-built Safehaven XSV20 was put to the test during its 2,500nm delivery voyage from Cork Harbour to Porto Cervo on the Sardinian coast. Six-meter waves and 40-knot winds were no match for the vessel and its crew as it journeyed across the Bay of Biscay to its awaiting new owner. A unique hybrid hull design features an asymmetrical catamaran with a wave-piercing monohull, achieving a carefully-calibrated combination of stability and rough-weather performance.

The design incorporates a hydrofoil system for efficiency at high speeds, and initial sea trials during the build showed the boat achieved a maximum speed of 45 knots. For crew and passenger safety, the interior is equipped with Shoxs 2400 military-spec shock mitigation seating for all personnel. The air shock design of the seating system absorbs wave impacts and vibration acting on the hull, allowing the crew to avoid injury and fatigue from the constant exposure to hazardous forces.

The extreme sea states experienced at the approaches to Cork and its harbor mouth allowed the Safehaven craft and the shock mitigation seating to be tested thoroughly. The vessel experienced 3m to 4m seas piling up and a rough passage along the final leg across open water. As the Safehaven craft approached Sardinia, the crew calculated an average speed of 23 knots during the journey, with some passages being run at 30 knots or more during daylight hours.

The Safehaven crew completed the 2,500nm voyage almost non-stop, with a few breaks for refuel and crew rest. Once the vessel arrived in Porto Cervo, the Safehaven delivery team returned home safely and injury-free.