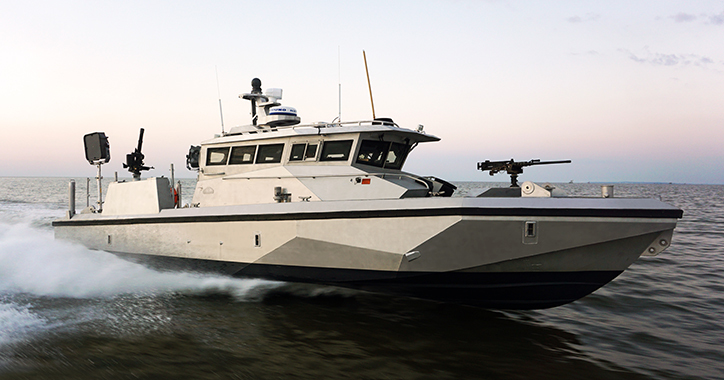 Metal Shark Boats, a shipbuilder specializing in the design and construction of welded aluminum and steel vessels, recently announced an award from the US Navy for 160 patrol vessels for worldwide deployment with the Navy Expeditionary Combat Command's Coastal Riverine Forces (CRF). The vessel, known as the 40 PB, is a 40-foot, welded aluminum monohull pilothouse vessel with a unique faceted hull design. The vessels will operate during asset protection and port security missions, but are capable of making forays into hostile environments with six MK 16 weapons foundations plus MK 49 / MK 50 weapon systems foundations.

“The need for more advanced and capable vessels, designed to discourage asymmetric threats and to respond to them with overwhelming force, has led to the development of this radically different patrol boat platform,” explained Metal Shark’s CEO Chris Allard. “While we designed the 40 Defiant to meet the US Navy’s PB-X mission requirements, this vessel is driving the evolution of our entire military patrol boat lineup and offers a glimpse into the future direction of military patrol.”

The armored pilothouse can accommodate a crew of five with SHOXS 4800 seats. The 4800 is a marine suspension seat that converts to a standing bolster for high speed interceptors and military vessels, with typical applications including helmsman, navigator, crew or pax (passenger) seating. The drop out seat pan enables the occupant to choose standing or seated operation of the boat and critical equipment. In the seated position the footrest provides whole-body isolation, giving the occupant maximum protection from wave impacts acting on the hull and deck.

For more information about the 40 PB, visit the Metal Shark website.