The SHOXS Pro Team is a group of influential boaters and offshore anglers passionate about keeping people safe and injury-free on the water. (They might get some cool SHOXS gear, too.) Our Pro Team staff embodies our values and represents the SHOXS mission out on the water.

Interested in learning more about joining the SHOXS Pro Team? 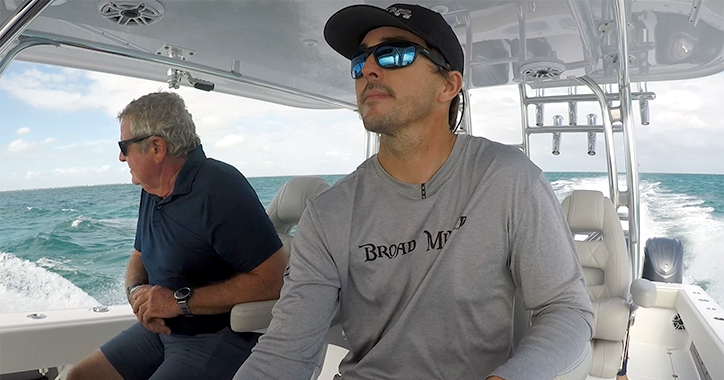 The Secret to a Smoother Ride The swordfishing grounds are anywhere from 25 to 45 miles out from Bud N’ Mary’s Marina in Islamorada, Florida, and Capt. Nick Stanczyk has been in search of a way to make his daily trek offshore more comfortable.

The constant impacts from waves, especially daily as any charter captain endures, can cause fatigue, aches and long-term chronic injuries, as any experienced boater already knows. Having more time on the water is critical to Nick’s health and livelihood, so securing top-of-the-line gear is a worthy investment.

His 42’ Freeman Boatworks center console already had an exceptionally smooth riding hull, and Nick wanted to take it to the next level with the best available seating technology. He turned to Allsalt Maritime, who helped him swap out his fixed seat pedestals with Shoxs X4 suspension mounts. He wanted to keep his existing helm seats, and the design of the X4 allowed him to do just that.

Conservationists with a Mission The Gatecrasher team, consisting of Captain Zack Medinas and co-captain Virginia Salvador, believes in the tradition of harvesting sustainable fish such as Salmon, Rock Cod, Halibut, and Striped Bass and fishes exclusively catch & release for the largest and oldest anadromous fish in North America, native white sturgeon. They enjoy bringing people together by creating fishing moments on the water.

After three decades at sea, Captain Zack has a damaged back with herniated discs. To keep him comfortable, he has has retrofitted their 28-foot Farallon with a shock mitigating 3200 X8 seat. Fishing out of the San Francisco Bay Area, they run their charter boat offshore in often very rough seas. Based on the frequently extreme marine forecast, they consider shock absorbing seats a necessity for their daily charters.

"We need to bring our best efforts on the water, so we wanted seats that will let us charge hard all day, every day," says Zack. "My entire body, especially my back, benefits from having this seat underneath me. With Shoxs, I don't worry as much about how the fishing lifestyle will affect me over the long-term." 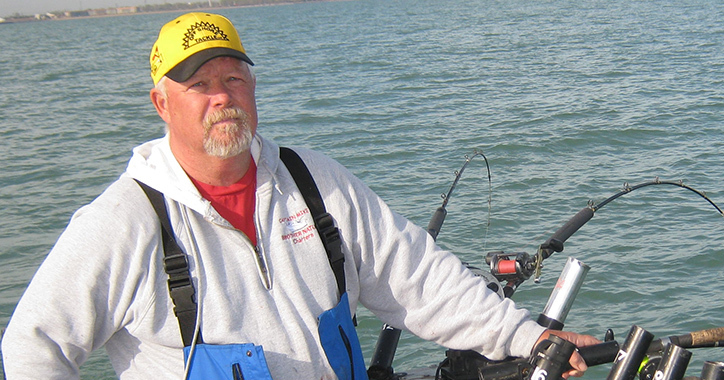 In 1998, Captain Mike Schoonveld pioneered operating “limited-load,” relatively small boat charters on the Great Lakes. Prior to this almost all charter operations on the Great Lakes were conducted on six-passenger or larger, cabin cruisers.

Schoonveld’s Brother Nature Fishing Adventures, catering to couples, families and small groups on a 21-foot open boat, proved to be a successful business model. Dozens of other captains around the Great Lakes now provide affordable access to exciting fishing action on these inland seas on smaller-sized boats at affordable rates. 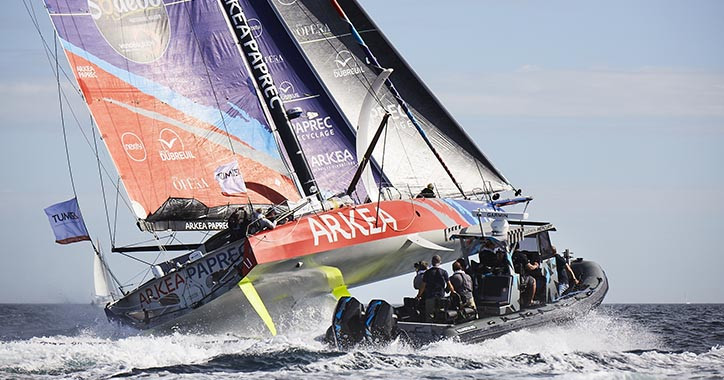 The Azimut Challenge is a 48 hour offshore sailing race leading up to the “Holy Grail” for solo sailors, the Vendée Globe. The Vendée Globe is the only non-stop, unassisted sailing race around the world on 60-foot International Monohull Open Class Assocation (IMOCA) sailboats. Setting sail from Les Sables d-Olonne, France every four years, it is a popular race that appeals to young and old alike with attendance of more than 2 million visitors.

Naturally, such exceptional international events require nonstop journalistic and media coverage. Members of the press, following the racers in small chase boats, are subjected to high winds and waves as they attempt to steady their cameras to capture the action. 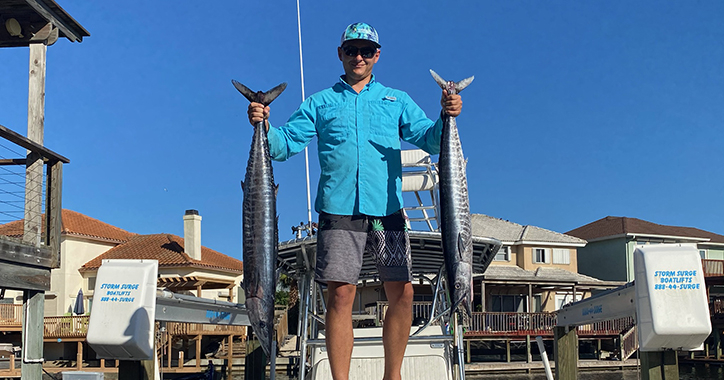 Michael Hall, owner of an engineering consulting firm in Corpus Christi, Texas, likes to fish a little differently than most. Most people use their fishing boat as a tool to catch fish offshore via trolling; Michael gets up close and personal – holding his breath and fishing using a speargun. While most of his fishing happens outside of the boat getting to the spots quickly and in one piece is critical.

Living on the Western-most portion of the Gulf of Mexico lends itself to a steep, tight chop. Unless your boat is 35+ feet long, you don’t have much of a choice but to go slow. For Michael, slow isn’t really an option. “My fishing mates often tell newcomers to the boat that I have two settings while driving: idle or full throttle.” His need for speed is what initially got him interested in shock mitigating seating. “While my body can take a bruising, I wanted to ensure my knees and back stayed limber so that I can continue to fish my entire life. I figured adding shock mitigating seats to my boat was a cheaper alternative to buying a new boat 6+ feet longer than my current one.” 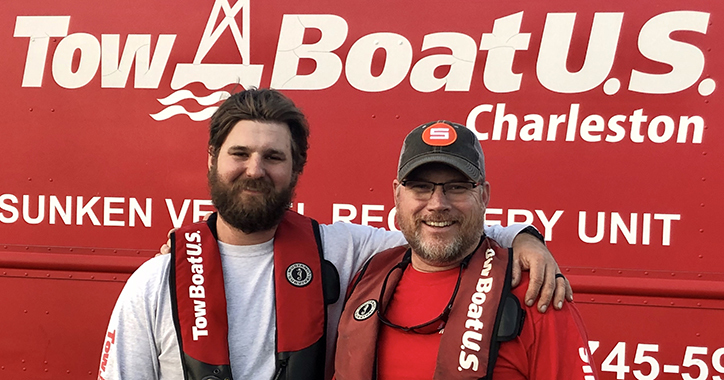 For Joe Abeyta, running a TowBoatU.S. division is a family affair. Joe, a 24-year veteran of the United States Coast Guard, and his brother Thomas Griffin, a Merchant Marine with a 1600-Ton Master license, along with their wives, Layla and Kirsten, run Allwater Marine Services, a fifth generation family-owned business in Charleston, South Carolina.

The company acquired the TowBoatU.S. Charleston brand in December 2019. 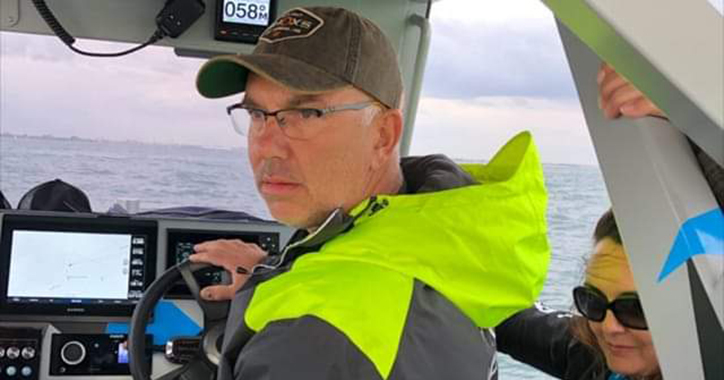 Gwenael Kipson grew up in the Brittany region of France, and discovered the joys of sailing and navigation early on. He began to sail more seriously with semi-rigid hull craft at the age of 18, and went on to follow several offshore races and nautical events. The Route du Rhum, a transatlantic single-handed yacht race taking place every 4 years between St. Malo and Guadeloupe was one of the events with which he was involved.

In addition, he handled event safety in international jet races, fly boarder security, offshore race starts, and even treasure hunts. He was part of the team to train an officer of the Royal Navy who successfully crossed from Senegal, Africa, to Guyana. “We wanted some of these amazing seats to make our fishing tournaments a little more comfortable. The quality is unbelievable, and we trust they’ll keep our team from getting injured during competitions.” 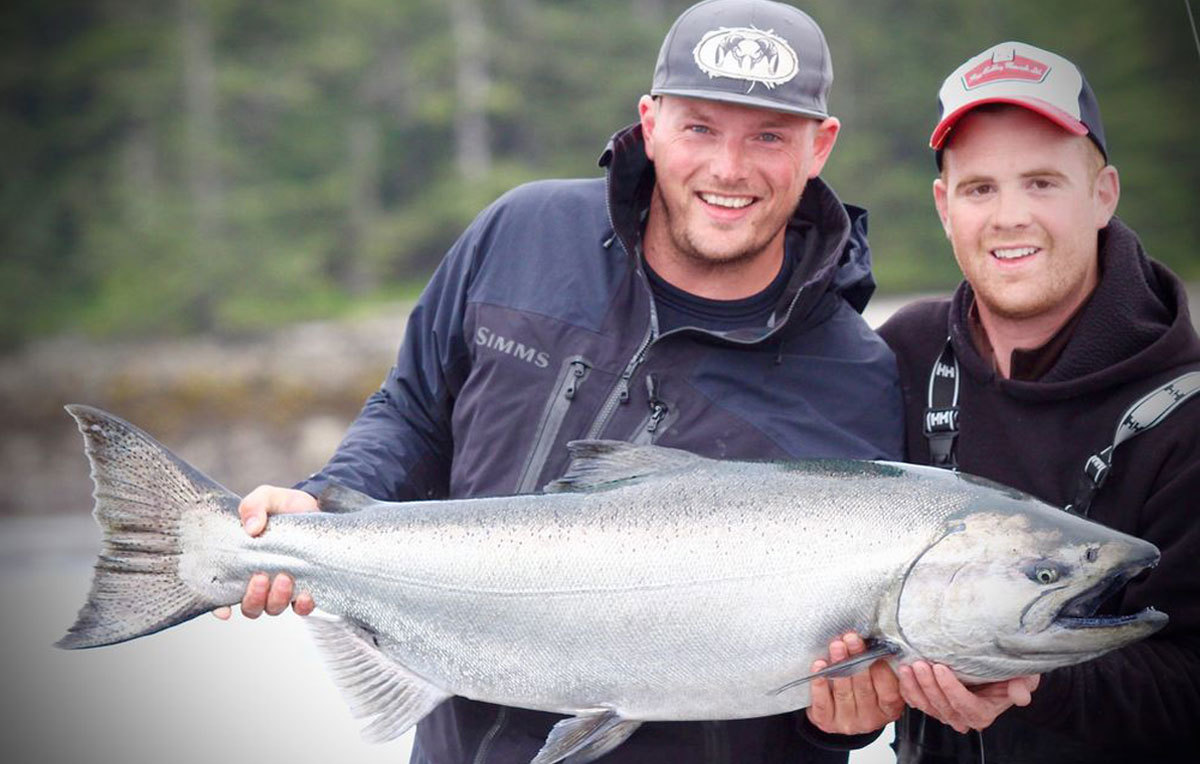 Born and raised in Victoria, British Columbia, Brent Story spent many of his childhood days fishing with friends and family. Angling turned into an obsession during his teens and led to the pursuit of professional guiding. Brent has guided the Pacific Northwest waters of Haida Gwaii and as far south as Central America. Today, he runs a busy guide service out of British Columbia called Pacific Pro Charters, hunting salmon, halibut and lingcod off the coast of Vancouver Island.

His boat, Chasin' Tail, is a 30' Northwest Aluminum Craft, and built to handle the rough waters of the Pacific Northwest. Regardless, long days on the water took a toll, and Brent decided to install shock-mitigating seating in his boat. After some investigation, he chose a SHOXS 6155 helm seat and two SHOXS 6300 companion seats to relieve the impacts from the waves, not just for him, but for anyone riding shotgun as well. "It's nice when you have the seats, especially when you're running out every day," he says. "There are other seats out there, but they just don't hold up." He says his clients are more comfortable, and they can run offshore harder and stay out longer without suffering the consequences of a rough ride the next day. 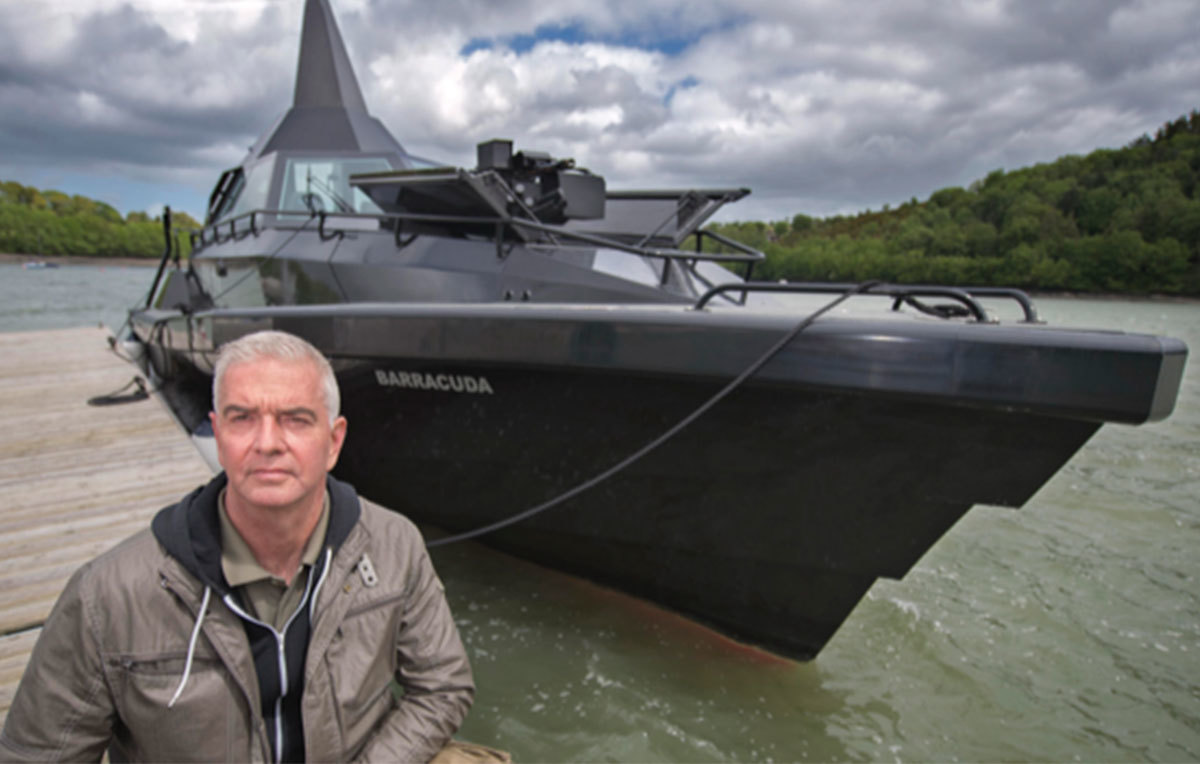 Frank Kowalski is the owner and general manager of Safehaven Marine in Cork, Ireland.

Frank has a long history in the commercial marine industry and spent many days on the water in bad weather and rough-riding boats. This led to an intimate understanding of what constitutes a vessel’s seakeeping abilities and an appreciation for a boat’s ability to inspire confidence and a feeling of safety in the crew. He now designs and builds commercial pilot vessels and workboats and is gearing up to set a new Transatlantic record in a high speed patrol craft, Thunder Child II, using SHOXS seating for the crew and helmsman.

Having the best shock mitigation seating was essential