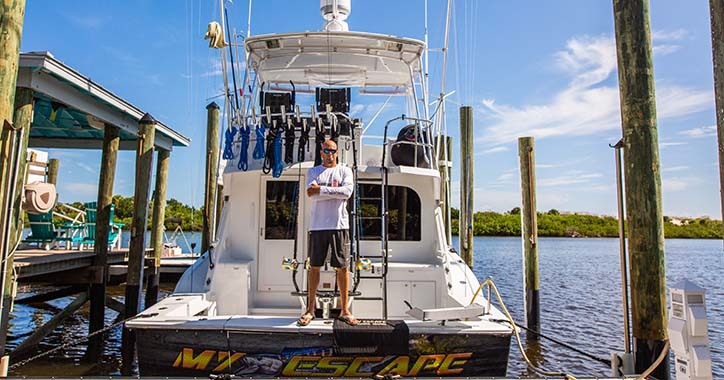 The boating lifestyle has always been in Eric Bartolozzi’s blood. Originally a Northerner, he now lives on the east coast of central Florida, with not one, but two boats floating at the dock behind his house. Escaping to the Caribbean islands in search of snapper in his 55’ Hatteras sportfish allows him some down time among the busy seasons of running a landscape design company, and he makes the trip every chance he gets. During tournament season, his fishing team, Team My Escape, hits the southeast circuit of offshore competitions.

During a recent extensive refurbishment on the Hatteras that included constructing the dash out of black carbon fiber, he needed to update the original helm seating. The captains’ chairs had ripped fabric, a broken backrest, and white upholstery that didn’t match the new helm design. After searching for some time for replacement helm seating, he decided that a pair of black SHOXS 3200-X8 seats would complement the look of the dash, while giving him the shock mitigation necessary for his frequent trips across the Atlantic.

“Conditions are pretty unpredictable in the Gulf Stream – the waves can get big in an instant. SHOXS makes the rough seas feel like glass,” he says.

Eric also says his SHOXS suspension seats also give him that extra edge during tournaments. "You always want to be the boat with your lines in the water first. Now we can get offshore faster without beating up the guys too badly, so they're ready to fish when we get there."