The Human Response to Wave Impacts 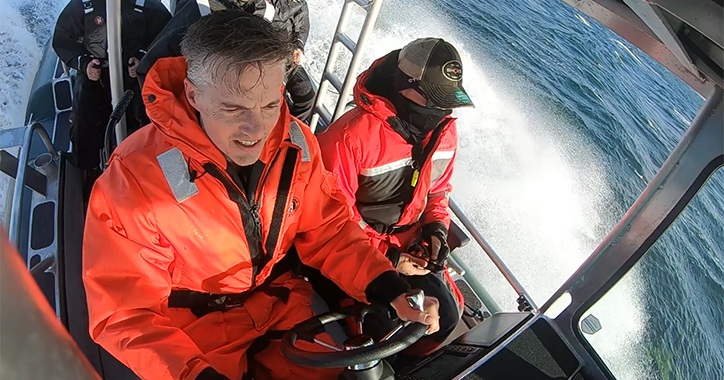 While designing for dynamic environments, like those found on high-speed vessels, engineers are constantly challenged with problems of acceleration. Acceleration is often measured in units of “g”, with 1 g equal to what is experienced due to gravity at earth’s surface (9.8 m/s^2).

Acceleration imposes strict limitations on safety, and under severe exposure humans and hardware can quite literally break.

The human response to acceleration can include all sorts of adverse reactions to the body. Prolonged exposure can affect circulation and rupture blood vessels and endanger skeletal structures. At high accelerations, G-LOC, redding-out, and greying-out are among the possibilities. For comparison's sake, astronauts can sustain 3 to 4 g during launch, but the limits of human tolerance depend on multiple factors, including magnitude, direction and rate of change. What a person can withstand in the forwards-facing direction might be entirely different from what they will tolerate in the vertical.

With that in mind, let’s talk about impacts, and more specifically, wave impacts involving boats on rough water. These impacts, a form of mechanical shock, come in at all angles, creating bursts of acceleration. They may be erratic and unpredictable and can include rotational components. These impacts have pulse durations on the order of 100 milliseconds, which is brief in comparison to a shuttle launch, but the abrupt transitions in a wave slam only makes it more brutal. And wave slams can be surprisingly intense: for military-use in fast boats, testing at up to 10 g is required.

Shock-mitigating safety equipment typically consists of an interface between a surface (such as a boat’s deck) and a human occupant. The impact is mitigated as it passes through the medium, resulting in a gentler motion for the person on board. The mitigation response boils down to energy being absorbed during compression and deformation of the medium.

As a seat compresses, impact energy is transformed into spring potential energy and dissipated as heat in a damping chamber as the seat exercises its stroke and rebounds. If it functioned correctly, the seat will return to its equilibrium position, having reduced some relevant measure of acceleration as it resets for the next impact.